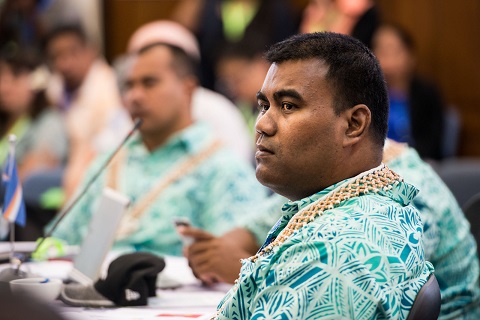 On the achievements Kiribati have made since the last meeting in 2015, Mr Ueneta Toorua acknowledged regional agencies, donor partners and other organizations that have supported the Kiribati Meteorological Services directly or indirectly over the last two years.

Some of the achievements Mr. Toorua mentioned in his report were the completion of the in-country refresher training to meteorological observers, technical support and guidance toward compliance to Part 174 as required in weather service for aviation, the ongoing three construction of a new meteorological building at Cassidy Airport on Kiritimati Island, support to have  automatic weather stations that will soon to install in three outer islands (Nonouti, Abemama and Maiana), and manual equipment for Bonriki  and Cassidy Airports.

He added that among the external support, the Kiribati government has also put some effort into improving the national meteorological service. He also highlighted the need for inclusion of a project-funded staff position to the permanent office, provision of office vehicle to support Met operations on Kiritimati.

Mr. Toorua said the government was also reviewing a KMS proposal on a re-structure for 2018, which would provide additional positions for qualified managers post to improve compliance to national and international regulations and requirement.

The director said that the government of Kiribati had a vision called the KV20, where tourism and fisheries were key priority areas for “a quantum leap” in terms of Kiribati Development plans.

He said the government was seeking more support to expand the Climate Early Warning System and the re-opening of their manual stations for full coverage, and support to establish an Observation and Forecasting Office next to airport in the capital Tarawa. The government also wanted support to enable more staff to undertake meteorologist training courses, support to improve early warning communications to all Kiribati outer islands, which were out of range from internet and telephone networks, and support to improve base services on how weather and climate information can assist health, tourism and fisheries in Kiribati. - #PMC4 #PacificMet