Roadmap applauded as it awaits endorsement 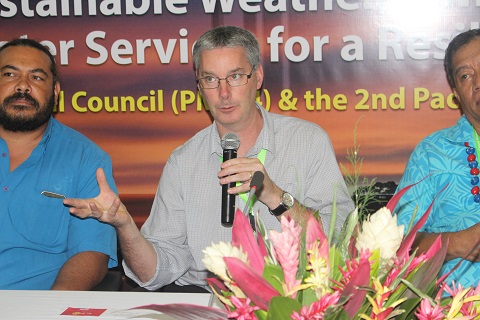 The roadmap is a guide to identify and implement critical priorities for each Pacific island countries, ensuring governments and communities have reliable and well-understood information on climate. The guide is expected to be endorsed during the second Pacific Ministerial Meeting on Meteorology (PMMM) to be held here in Honiara on Friday.

Chair of the PRSC and New Zealand-based climate scientist, Dr Andrew Tait stressed that while the roadmap provided an overall guidance for the generation and delivery of climate services in the Pacific region, it was important to note that no single approach would suit all countries and territories. Needs would change accordingly with time and circumstances.

“Each Pacific country with its own priorities and starting point can use it to develop its own route map or implementation plan to deliver the climate services it requires,” he said.

“It is important to understand that there will be a need to change course, as needs change as well as impacts, and address them accordingly.”

Members of the PMC acknowledged the need for such a guiding document in the region.

Elisabeth Holland, Director for the Pacific Center for Environment and Sustainable Development (PACE-SD) at the University of the South Pacific (USP) expressed full support for the strategy, “in particular USP’s willingness to participate in all the pillars in particular research, modelling and prediction.”

Tonga’s Meteorology Director ‘Ofa Fa’anunu added that the roadmap was something that has been in the pipeline for a long time, and acknowledged the chair for bringing it to life.

The roadmap is closely aligned with the Global Framework for Climate Services, a United Nations initiative led by the World Meteorological Organization (WMO) to guide the development and application of science-based climate information and services to support decision-making in climate sensitive sectors.

The need for the roadmap was identified at the regional consultation on climate services for Pacific small island states meeting held in Rarotonga, Cook Islands in early 2014 and further discussed in Fiji earlier this year.

One of the key components of the roadmap includes the establishment of a virtual regional climate centre network in the Pacific that will target meteorological services to access information across the entire region so that countries have the data to be more aware of what was happening around them. – #PMC4 #PacificMet